I looked forward to the bridge construction with some trepidation, to finish the bottom loop I required a trestle bridge thirty feet long with a six foot single span section over the “big hole” This all had to be on 20ft radius just to add to the difficulty. I was originally going to make the bridge in wood like the traditional American trestle, but decided to stick to steel construction for ease of construction and maintenance. It then occurred to me that the length was actually quite short when you look at elevated track construction, many portable elevated tracks are much longer and are assembled, used and removed easily in a day.

Most steel elevated tracks use angle iron to give strength to a relatively long span between supporting legs. The rail usually forms an integral part of the structure adding to the strength rather than just sitting on the top. I was not able to use angle in any length on my bridge because of the curve required so instead I opted for the largest section steel flat that I could easily curve. I did think of having two or even three lighter rails to increase the strength and to give check rails in case of derailments but decided against this because of the difficulty of keeping the gauge and avoiding distortion when welding. In the end I opted for the rail in black mild steel flat 10mm by 20 mm, this size was about top whack for our set of bending rolls. As the rail was relatively light it did not allow a big span between supports, I put in an A frame every half meter run. As there were quite a lot of A frames they were made of relatively light construction using 25 by 25 by 3mm steel angle. The track was welded up in approximately two meter panels with sleepers made from 25 by 3mm steel flat every quarter meter. The sleepers did not need to be very stout as they either stood on an A frame or only served to hold gauge between the supports. The top of each A frame was extended to give a mounting point for timber side boards to support the train in the even of a derailment. 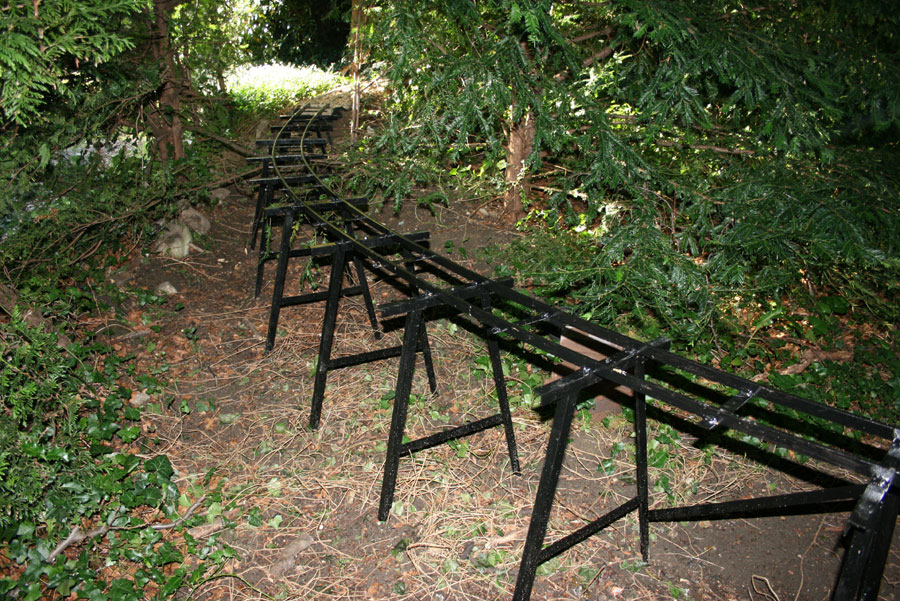 I commenced this part of the construction while pondering the design for the single span part over the big hole. To begin with there was a complete change of tooling, gone were the gentile battery drill, screwdrivers and BA size spanners. In came the big stick welder, angle grinder with cutting and grinding discs, mains power drill, large hammers etc.
I should at this stage say that I do not consider myself a great expert with the arc welder, I can usually stick two bits of metal together but the result may not look very pretty.

My first encounter with this form of welding was when working part time at a local boat yard. A Land Rover required a plate on the back of the chassis for the towing hook, I was persuaded to have a go. I was well used to gas welding having “practiced” on a number of old vehicles over the years but arc was new to me. I gave no guarantee as to the strength of the repair but fixed the plate in place. On my next visit I was gob smacked to see the same Land Rover pulling a very large boat out of the water on my welded tow hook, I simply could not watch and just had to go and do something else while this trial of strength was taking place. To my immense relief the hook staid in place!
I started by welding up the first track panel and set of A frames. I have learned with welded track to attach both rails to each sleeper at the same time, this reduces distortion as much as possible. Even so one panel got a bit of a twist in it. It is an indication of the strength of the panels when the only method that worked to remove the distortion was to lay the panel on the ground, drive the car over one end, place a large piece of timber through the other and then jump on it! 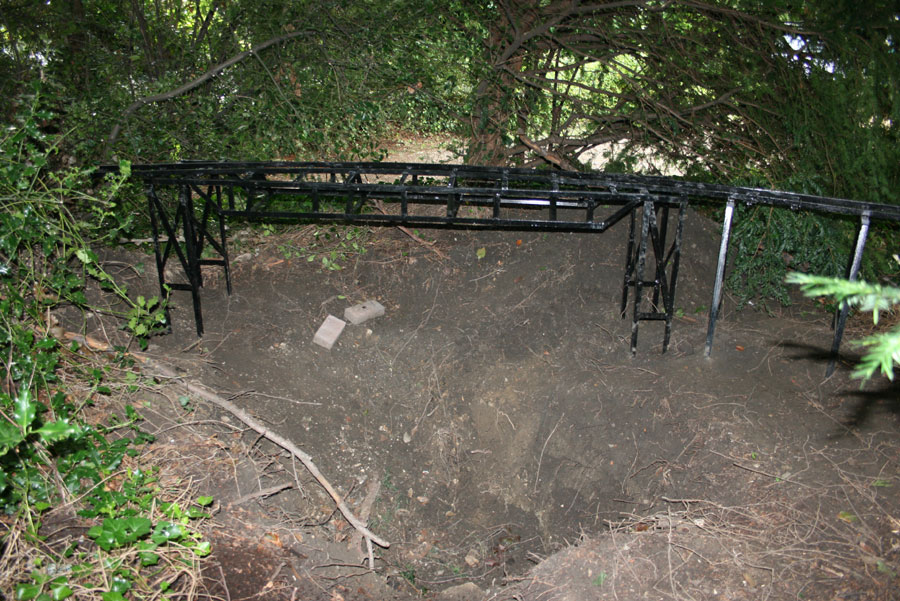 As the ground level fell away from the end of the embankment the A frames were made longer ranging from about half meter to one meter for the longest. All parts were given a coat of black Hammerite rust resistant paint and laid aside to dry.
Each A frame stood in a hole dug down to subsoil level, this hole then had a half brick laid in the bottom for the A frame to stand on. The holes were not easy to get to the correct level, I found a triangular paint scraper the best tool for cutting a flat base in the hard soil at the bottom of the hole. A small amount of soil was added or removed from the bottom of each hole until the brick and A frame stood at the correct level. The track panel was then placed on the A frames and a 6mm bolt used to bolt each A frame on to the sleepers. I expected to have to use several diagonal strips to strengthen the assembled bridge section, in the even only one was necessary. The finished section stood very firmly on its brick foundation but still allowed some final alignment before filling the earth back round the A frame legs. The second track panel was laid in the same manor with the track joint made by welding an angle to the end of each panel and bolting the two angles together below rail level with two M6 bolts. Once again only one diagonal brace was required, the whole assembly forming a very rigid structure joined to the existing rail formation with two cranked fishplates. This got the track to either side of the big hole, it only remained to make the girder bridge to complete the bottom loop. 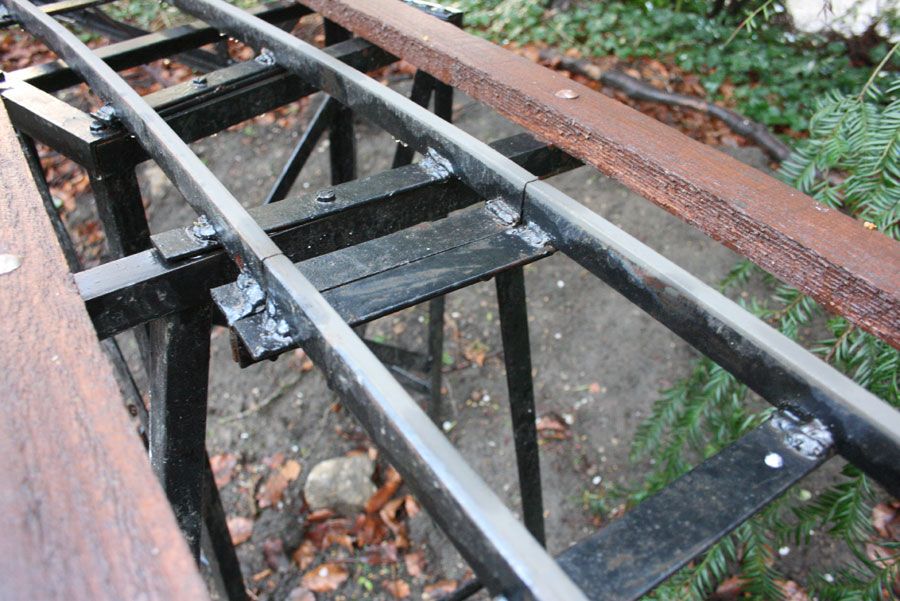