The year 2008 was celebrated by extending the line at the top end across the lawn. As I intend to get to the top part of the garden the gradient had to be maintained across this section which was far from flat in the first place.
I started by marking the line of the track across the bottom of the lawn using a spade to put in two track bed edge lines following the desired curves. From here a section of grass was removed every ten feet or so. The earth was removed down to track bed level by eye, this was then followed up using the laser level. A peg was then driven in to the ground to mark rail level, and the track bed level adjusted to match. Each peg was given a rise of about two inches to get the correct gradient.
The rest of the grass was taken off and reused on embankment sides and the earth dug down to the track bed level guided by the pegs. As the next part of the construction needed embankments there was no problem using the excavated soil. The only hold up was that this part was through some very dense undergrowth that needed clearing before the soil could be tipped. 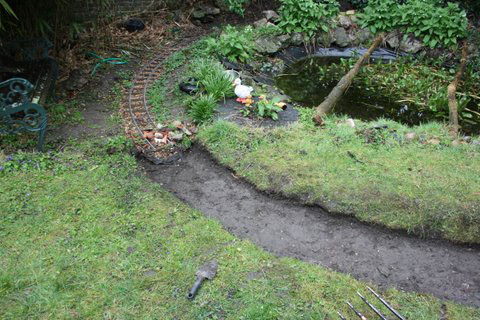 The resultant track bed was some distance below the grass level giving a cut soil edge in places nine or ten inches deep. I had some problems with soil erosion encroaching on the track in the rockery cutting and could for see problems here as well. The solution was to cut under the grass, fold the turf back, slope the soil down to track level and then replace the turf. This gave a nice grass slope down to rail level, it reminded me of the hidden wall used in stately homes to give an unobstructed view from the house but stopping the cattle from getting in to the garden and eating the flowers. I am told this is called a
“ha ha”, but my version only conceals the track and gives a safer edge to the cutting for children. The path the line had been following from the loop peters out near the pond so a fresh path was laid giving a short cut round the pond. The path crosses the line so as to give access to the lawn and hopefully to stop little ones walking through the rockery cutting.

Progress on this part was slow as dark evenings meant that work was restricted to weekends only. However we had track sufficient track down by early March to give us some running in the last of the winter snow flurries. The first anniversary of construction found the line starting on the embankment built from the lawn excavation. At this point we are quite near the bottom loop but have gained about two feet in height from this section. The exact height is difficult to judge due to the dense nature of the undergrowth but this all adds to the scenic appeal of the line when glimpses of different vistas appear and then disappear as you travel along. 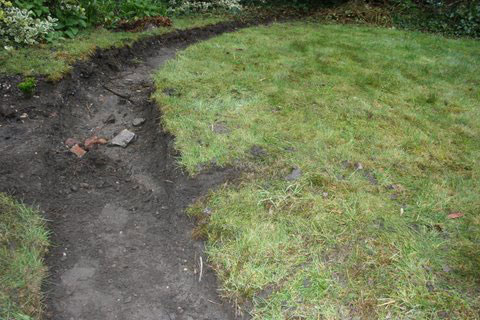 The next section of track was though dense undergrowth, and needed a considerable amount of clearing. In addition the ground level fell away making all of this section on an embankment. Just to add to the interest there was a tree stump in the way, this had been a large poplar tree about twice the height of the house. The tree was in an unstable condition and was felled about four years ago but the stump was still very solid and only responded to being chipped away with an axe over an extended period of time. Fortunately the track only skirted the edge of this stump so the bulk of it remains firmly in place.

Some smaller trees and bushes were transplanted or simply uprooted, I like to transplant as much as possible though thanks to my gardening skills there is a good chance some will not survive.
The ground, once cleared, was covered in a layer of leaf litter. This is too soft to take the embankment so had to be cleared as well, however in keeping with the philosophy of reusing as much as possible I have found this a useful commodity for making paths and covering the edges of the track underlay. It is very light and washes away after a time but blends in well when it is there, and you get a fresh lot every year! 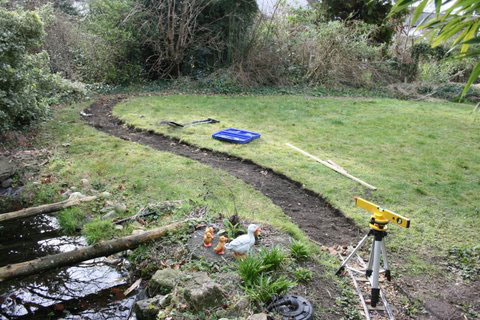